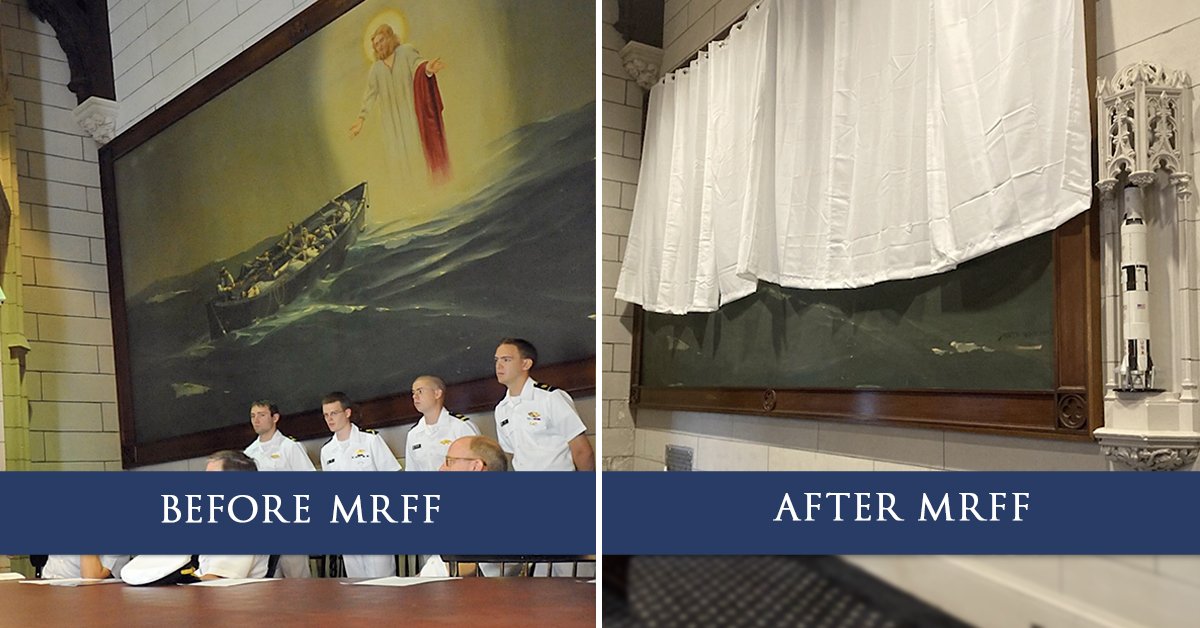 A massive painting of Jesus on display in the US Merchant Marine Academy in New York has been covered by a curtain after objections that the religious image should not hang in a room used for mandatory activities.

The painting, featuring Jesus with his arms outstretched over a lifeboat packed with sailors lost at sea, turned into a point of tension for non-Christian students and staff.

Eighteen people, including five Jews, asked the Military Religious Freedom Foundation to appeal on their behalf to the Kings Point academy, which reports to the US Department of Transportation, the Jewish Telegraphic Agency reported.

The academy’s superintendent Joanna Nunan “I have asked my staff to purchase a curtain to be placed in front of the painting,” she wrote in response, the report said. “This will completely block the painting from view, but also allow those who wish to view it the opportunity to do so. Second, I have asked the Director of the American Merchant Marine Museum to prepare a plaque that explains the history of the painting, which will be installed near it.

Joanna Nunan should be commended for her actions and response to this situation. It is a belief of faith that these students will be working at sea and it gives comfort that the lord will be looking over them.

It also pertains to working conditions that they will be in and the dangers that come with it which is in the scope of the school. The  Jewish group and the others that were offended have every right to put up  a representation  of their faith to compliment what is there. The history of the painting will also be there on a plaque so it will be a teaching moment which was also mentioned by Mikey Weinstein founder of one of the Jewish organizations who took exception to the painting

But once again, this is just another issue with where we are as a society. Everybody is offended and everything has to be removed. In this situation an equitable solution was offered and was accepted.

Why can’t this be done with statues, when something that was created at a given point in time now has to be taken down without the common sense of keeping it there and making it a teaching point.

If we start taking down everything that everyone feels offensive about there would be nothing here. There will be no connection to our history at a given point in time.

Statues of Columbus are being removed as the woke mob are upset about his nefarious background yet people are putting up tributes to George Floyd who was a convicted felon.

We are in are in a culture where religion has become a flashpoint of controversy when we are moving away from its true value of comfort, acceptance and love.

We discuss this live on Davin’s Den this Tuesday January 24th 2023 6:30-9:30 et. Go to davincomedy.com, click Davin’s Den and then listen live or join us on the Davin’s Den Facebook page.

PrevPreviousGEORGE SANTOS IS A LIAR