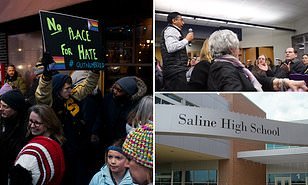 The suit contends the school had no jurisdiction for off campus behavior.

Two of the unnamed students, all white, have returned to their classes while the others face expulsion for their Jan. 26 Snapchat texts where they reportedly used the N word and white supremacy statements, according to the students’ attorney, David A. Kallman. Kallman contends their punishments violated their first amendment rights.

Although the suit acknowledged that the students’ Snapchat thread was inappropriate and immature, it argued that the school had no jurisdiction to discipline them since the texting took place outside of school grounds and the students were denied their due process rights.

I feel the lawsuit is justified, whereas the incident which was inappropriate and stupid does fall under free speech and was not done on the campus or used on any of the school’s social media platforms.

Should of these kids been disciplined? Yes, at home by the parents. Should have there been a meeting that got heated on race issues over the situation? No.

What should have happened is the school should have addressed the issue in a letter to the parents and then stated that they would have all the students at the school attend a presentation on racism addressing the situation at hand.

They missed a perfect opportunity to address the right to free speech, how many people in our country are affected by racism, and that racism does not have a place on social media or anywhere.

And even though you have the right to free speech you need to accept the ramifications if you post such material.

Go to DavinComedy.com and click live broadcast and you are there.