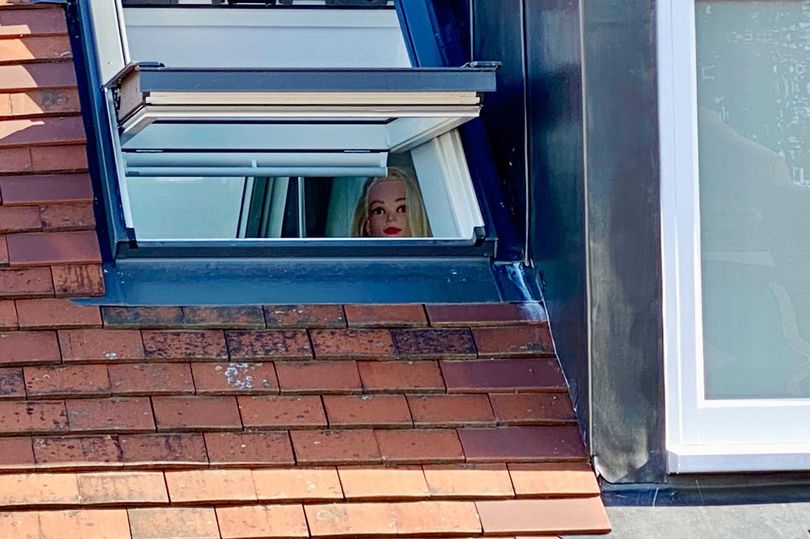 In the United States, most people in the suburbs are used to living in single family homes.  In England, having a single family home, or what they call a “detached” home, is something only wealthier suburban homeowners can have.  Most homes are attached, meaning that you will share at least one side of the home, if not both, with neighbors.  That would mean that those lucky enough to afford a detached home would most likely prize their privacy quite dearly.

So seems to have been the case between two homeowners in England, the Taylor Davies and Cook families.  After the Cook home underwent some renovations, the Taylor-Davies couple was distressed to see that there what we would call dormer windows installed in the top level, one of which looks over towards the top level of the Taylor-Davies’ home.  From the context of the story posted in The Sun, it seems that the normal thing to do is to cover the window with some type of film which would make it translucent, but not transparent, thus providing light while preserving the privacy of both homes.  The window wasn’t coated, and was  able to be opened, so the dormer window would allow a person to look straight into the bedroom and bathroom over at the Taylor-Davies home.

While complaining to the town about this new development, the article says that the Taylor-Davies’ said things like they had to hide behind a bookcase to change clothes, and that they had to close their curtains for privacy, which made them feel like they were “living in darkness”.  Oh come on now.  I know that having a window look right over towards your house in inconvenient, but it’s hardly like they were bathing in front of a picture window on the ground floor of a main street.  And you know what people who do live on the ground floor do for privacy?  They close their curtains!

It sounds a little like the Taylor-Davies couple got a little hysterical about the window being close, and not covered with privacy film.  The Cooks probably wanted to have windows that open for some ventilation, and who only knows why they didn’t cover the windows.  There was nothing to assume that there was any spying or peeping going on by either party, so it sounds a bit like the one family was accusing the other of being overly interested in what goes on in their home.  So much so that after the complaints to the town began, the Taylor-Davies’ decided to put a mannequin head in their window and face towards the Cook residence.  You want to accuse us of peeping?  Here, here’s your peeper!

The addition of the mannequin head proved to only make the Cooks go into hyper-paranoid mode, while most likely providing the Taylor-Davies’ with some laughs and comic relief from this tempest in a teapot. From the fuss the one house is making about having to close their shades when they are parading around naked, you’d think that something more serious was going on.

To be fair, I would be annoyed if my neighbor’s new window now faced my bedroom and bathroom, and they had chosen not to put the film over the windows, but unless they have to do so, it’s their prerogative to do what they like. Perhaps it is a little more of a hassle to close the curtains when doing private things, but it’s really not the end of the world.  They certainly don’t have to live in darkness. There are lamps, you know.

Was it a dick move to put the mannequin in the window?  Yeah, it kind of was.  But I can’t say that I’m above doing something similar to make fun of the paranoid people next door. It’s stupid to think that they put that window in to spy on the neighbors.  Unless they have good reason to believe that they are spying on them, they should just carry on with their lives.  It’s all a whole lot of shenanigans and first-world problems.