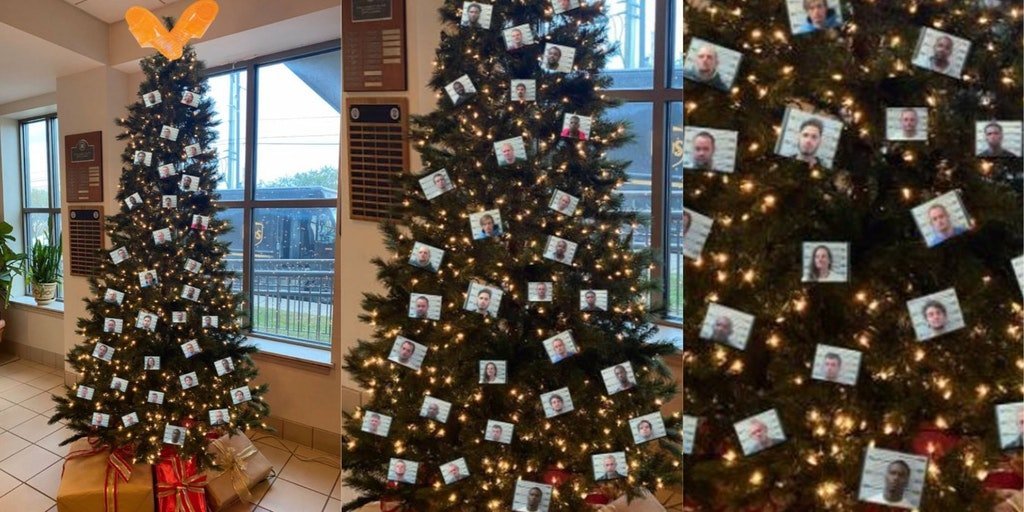 An Alabama Sheriff’s department is in hot water over their Christmas tree ornaments.  Seems the department decorated their tree with photos of their “frequent flyers” – criminals they labeled as “thugs” who are habitual criminals that they have seen go through the system a number of times.  Some of the THUGSHOTS are of those arrested, and some are wanted. Their stated intention for highlighting said thugs on their tree, and for posting the tree on Facebook, was to demonstrate for the community that the cooperation between the community and the police force is helping to get these people off of the streets.

However, the Sheriff’s department has been fielding thousands of online complaints about their choice of decorations, because detractors say that the display is demeaning and cruel.  Along with the online complainants are the ACLU of Alabama and the NAACP.  They have stated that the so-called thugs are predominantly mentally ill or substance abusers, and need society’s help rather than ridicule.

While I agree that those populations are in need of social programs to help get them out of the cycle of crime that they are currently in, that doesn’t make them innocent of their crimes.  Being a drug addict or mentally ill does not absolve people from their misdeeds and criminal behavior. Where society can make a change is by sentencing convicted petty criminals to drug rehabilitation programs, and/or provide them with mental health programs and facilities.  With the deinstitutionalization of the mentally ill in the 1960’s and 1970’s came a wave of suffering and homelessness that our society has yet to sufficiently address.  Because the mentally ill homeless don’t have access to a regular source of medication, or the social programs and help to make sure that they are compliant in taking their medication, a great number of them self-medicate with street drugs or alcohol.  To pay for these drugs, they resort to crime.

Now, does the fact that there are reasons why street criminals do the things they do absolve them of these crimes?  Absolutely not.  People should be safe to walk down the streets unmolested, be safe in their homes, be able to keep their property that they work hard for, and not have to live in fear.  For that matter, so should the mentally ill be entitled to the same things, and society should protect them from harm, as they are particularly vulnerable to assault and all kinds of crimes themselves.  But drug addicts and the mentally ill are not special classes that are to be protected from society’s ire and judgement when they commit crimes.

Being sick is literally not a get out of jail free card. The term “thug” usually refers to someone who is obnoxious, and probably violent. There is no problem in my mind with calling a spade a spade.  If a person is in a gang, they are a thug.  If they work for a criminal enterprise, they are a thug.  If they steal and harm people to get money for drugs, thug.  I don’t see where this needs to be justified, or how the civil liberties of said thugs have been abused.  The FBI’s Most Wanted list have been hanging in post offices for as long as I can remember.  What is the difference between that and hanging the faces on a tree?

Yes, we should provide help for the drug addicts and mentally ill when they are sentenced for their crimes.  However, they are no less accountable for their crimes that anyone else.  If that gets your mug on a Christmas tree, so be it.