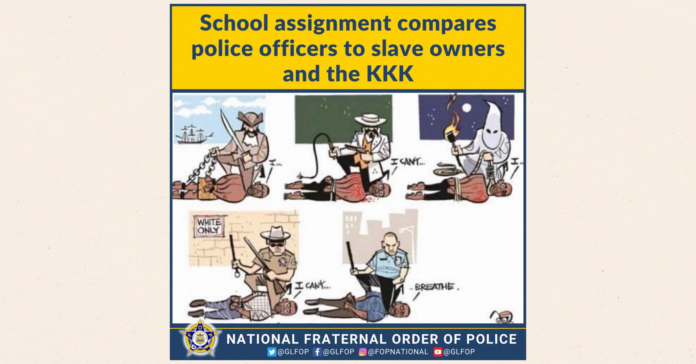 One of the stories we are going to talk about on this week’s show concerns a social studies teacher in Texas whose job is on the line for using a political cartoon as a teaching device.  The Governor is calling for the teacher to be fired for “comparing police officers to the KKK and slave owners”, which is a gross over simplification of the lesson – but we’ll get to that.  There are two real issues involved here – what is the truth, and what are teachers allowed to discuss in their classrooms.

The 5-panel political cartoon was supposed to be used in a middle school lesson regarding civil rights. In the first panel, an African man is being captured and chained by what looks to be a European.  In the second panel, the bound, captive African man is being subdued by a slave trader with a whip.  In the third panel, a KKK member is terrorizing an African-American man with a noose around his neck.  In the fourth panel, a pre-Civil Rights white Sheriff is subduing an African-American man with a club and a rifle.  In the fourth panel, in an obvious reference to George Floyd’s death, a police man has subdued an African American man.  In all of the panels, the oppressor has his knee on the neck of the African/African-American man, and in each, the man tries to say that he cannot breathe.

The common theme running through the cartoon is the oppression, and in some cases murder, of black men at the hands of white men. There can be absolutely no refutation of the truth of the first four panels.  They are clearly part of shameful historical fact.  The lesson comes with the last panel – allowing the students to discuss what the cartoon means, decide whether what is depicted is a fair representation of events in a historical context, and perhaps to debate the current theories regarding the Black Lives Matter movement and the Blue Lives Matter response.

As a former teacher, I can see how this lesson might lead to some valuable classroom discussion, some lively debate, and an opportunity to allow the students to come to their own understanding of what the two sides are arguing about.  One of the charges laid on the teacher is that the cartoon, and perhaps the lesson, are not part of the approved curriculum.  But since when were current events discussions not allowed in a social studies classroom?  The desired effect is to have students learn history, understand their world, and become critical thinkers.

Unfortunately, although governments give lip service to wanting to raise educated and critical thinking children to be the leaders of our future, the dirty secret is that a mass of people who are able to think for themselves are a danger to government and its need for a subdued population.  It is easier to control sheep than foxes.  This brings me to Texas Governor Greg Abbott calling for the termination of the teacher at the center of the controversial lesson.  The Governor is overreaching his authority by getting involved in a situation that should be under the auspices of the Board of Education in the school’s region. Just because the Governor is not fond of the subject matter does not mean that it isn’t a discussion worth having.

Historically, oppressors have had a pointed aversion to divergent thought, and have sought to subjugate those who have alternative viewpoints.  It doesn’t take much to see this Governor’s attempt to stifle free thought and free expression as a similar move. The local education authorities should be the ones who decide if the teacher has broken the rules, and whether there is validity to the lesson.  I hope they decide in her favor, and I’d love to hear the debate