THE MARVELOUS MYTH OF MRS. MAISEL – By Davin Rosenblatt 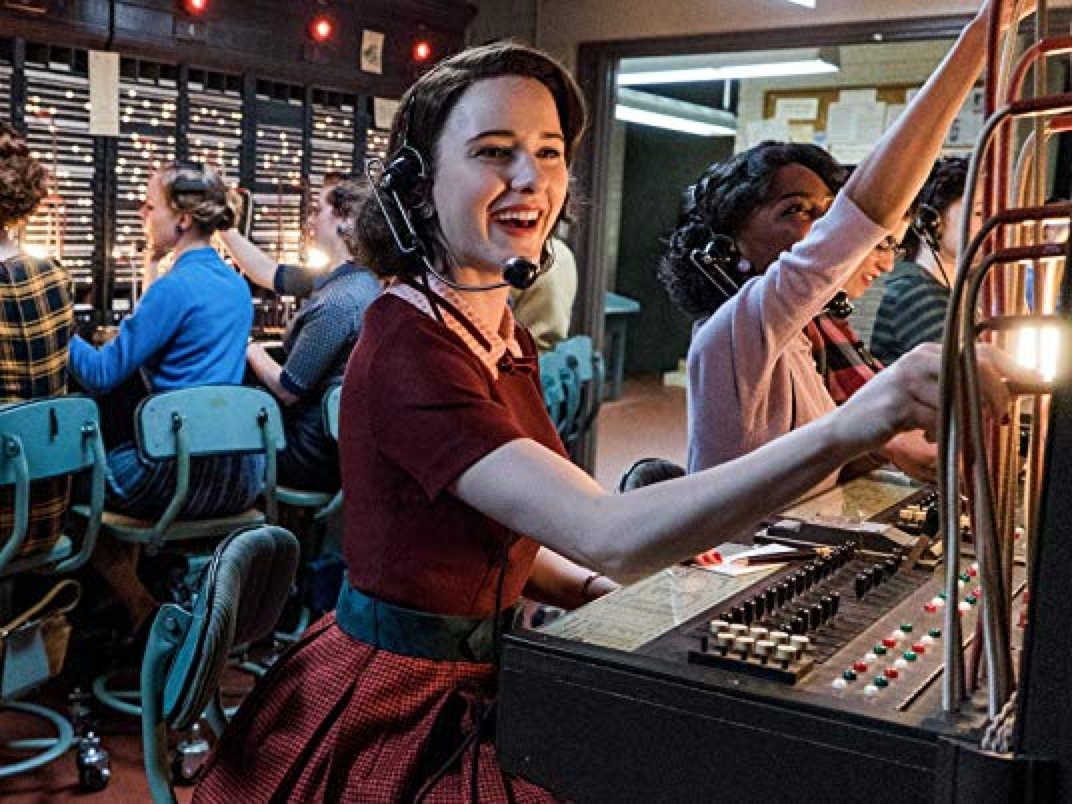 Every comedian has a friend or family member that tells them they must watch Amazon Prime’s The Marvelous Mrs. Maisel.  It is so realistic they coo.  Often the people who are telling us this seldom if ever see us perform live but they are experts.  I watched the show long after its enthusiasts had digested both seasons.  The show does get some things correct about life as a comic and it gets some things wrong.  I am not going to list chapter and verse which is realistic and which is unreal.  Really is it worth it to anyone if I did that? I don’t think so but there is one thing that I must delve into and set the record straight.

It is the creation of material and Mrs. Maisel’s “process” and the reality of what the process is really like.I think I am known as a very good improvisational comedian and a very good writer.  I know other excellent improvisational comedians and excellent writers. Comedians who have been at it for 10, 20, 30 years.  If you are a fan of comedy I am sure you have your favorites.  The two questions I often get asked after shows do you write your own material and do you travel with that person in the audience who you were going back and forth with.

Yes, I write my own material. No, I never met that person in the audience before. What you witnessed was completely spontaneous and will likely never be repeated again. If you watch Mrs. Maisel you would believe that almost all stream of consciousness material is brilliant and a success the first time it hits the stage and creating ten, thirty, forty-five minutes of material that wows the audience can be done in a very short amount of time. No and no.  All this in a year or less of comedy.  If only it was that easy.Mrs. Maisel seems to have the ability to get on stage and riff and wow the audience. Whether it is a late show at a resort or a television telethon she just talks and it all works out.

A good comic can deliver material like he just thought of it on the spot. It takes years to seem that spontaneous.  If it was possible to just talk and have a killer set every time out more comics would do that. What comedians do you know that deliver a brand new thirty minutes every night? I don’t know one. I create a lot at the moment but I have material to fall back on. Often if I am going stream of consciousness it has to do with the room or situation I am in. I can’t do 45 minutes off the top of my head of the thing my Dad did today. Nobody can do that. Even Robin Williams was improvising off his material and things in the room.  Mrs. Maisel, however, can show up and spew and the audience loves every minute of it.Mrs. Maisel experiences something in her life and brings it to the stage and the audience loves it. Often the occurrence was earlier in the day and she delivers it shiny and polished.  It does not work that way, especially when you are brand new and trying to find your comedic voice.

Don’t get me wrong, we do experience things and bring them to the stage. They just don’t come out precise with unfailing punchlines.  Here is what really happens when a comic is as inexperienced as Mrs. Maisel.  We experience something. We think it will be very funny.  We write pages of material down about how this joke will be.  We are convinced that this will be our new closing bit. We are convinced that this will be the bit that launches us into stardom.  We know it with every fiber of our body. Every word we have written is necessary. We rehearse the bit over and over again trying to memorize it. Trying to say it just as we wrote it.  In the best-case scenario we get to bring it to the stage. We remember the gist of what we wanted to say and we get a few chuckles or laughs during parts of the story.  There are many parts that the audience stares at us. If we are smart we record it and listen back to it. We then start to refine the words we use.

For a good joke, every word has to be there for a specific reason. Words are not to be wasted as they delay the laughter. We trim away the “fat” or sentences that we don’t really need to convey the message and get the laugh.  When we are starting out as comics, if we are lucky the process will take weeks or months to get that finely honed joke. It is often a much shorter version than the original piece of material we excitedly wrote down.  However, more often than not, that story or experience we wrote down is never quite right for the stage.  What was funny to us and our family never translates to a room full of strangers.  This is especially true for the first few years of a comedian’s career. Maybe the experience was never funny.  Maybe it is not right for the persona or person we present ourselves as on stage.

Maybe we are not good at editing ourselves and it still eats up minutes of time but never does get the laughs needed to justify its spot in a set for a paying audience.  Sometimes later on in our career we can come back to an old piece of material and make it work because we have the skill to edit it and we know who we are on stage. That really does not happen in year one.

Mrs. Maisel seems to craft a set of A material of thirty to 45 minutes in under a year. It does not happen that way.  The first year you are working to get enough decent material to get to 5 to 10 minutes.  Some comics work years and never achieve a killer 5 or 10.  The best comics in the world when they are motivated come up with a new hour in a year. First off, they already have their comedic voice because they have honed their craft for years.  They know what jokes they can tell and what jokes won’t work for them.  Audiences don’t want to hear Chris Rock talk about ham and cheese sandwiches and they don’t want to hear Jim Gaffigan talk about race relations. It does not work for them.  They know this because it has taken them years to figure out what works.  Comics like this spend hours writing.  Then they do 5 spots a night 5 nights a week ranging from 10 minutes to I’ll get off when I feel like it because I am a big star.  They can get that stage time because they are stars.

New comics can’t accomplish this and Mrs. Maisel is new.  It would appear Mrs. Maisel wrote more jokes for her husband Joel than she ever does for herself. We don’t see the hours of writing.  We know she is struggling to find stage time because she is new and she has been blackballed by Sophie but magically almost every time we see her she has new, finely tuned material.  It does not work that way. Watch Jerry Seinfeld’s movie Comedian.  Even when you are the best of the best it is a struggle to get the new 10, 20, 30, 45, 60 minutes. If it was that easy to create killer new material more comedians would not stop writing. Many comedians get to their 20, 30, 45, or 60 minutes and stop writing new jokes. Why? Because it is hard and it is risky. We are paid to get laughs. A paying audience has no interest in going with us on our artistic journey.  If we don’t get laughs then we don’t work. If we don’t work we don’t eat.  Even veteran comics can write jokes that land with a thud.

It appears Mrs. Maisel almost always hits a home run with everything she tries. Does she have a few rough moments? Sure but not nearly the amount a comic would have if they were performing brand new material every night.

Mrs. Maisel is a fine show. Just don’t tell a comedian that it is so realistic.  If it was everyone would do it.  Or if you go by Mrs. Maisel every Jewish person would do it. Tune in next time when I explain why the comedy condo on HBO’s Crashing was way too nice to be considered realistic.