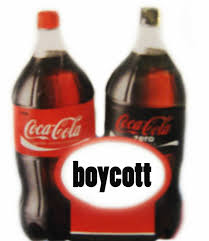 Trump supporters are calling for a boycott over reports that Coca-Cola is forcing employees to go through racism training that teaches white workers to “be less white”.

It encouraged employees to “Be less oppressive, be less arrogant, be less certain, be less defensive, be less ignorant, be more humble, listen, believe, break with apathy, break with white solidarity”, in order to “be less white”.

Coke spends millions of dollars on advertising that is geared to inner city kids that are killing them with diabetes, obesity and heart and kidney disease. They also use sports stars to influence minority communities to buy the sugary drinks they sell.

A study found that young black and Hispanic children are bombarded with soda ads at a higher rate than white children.

Coke is concerned with being less white, why aren’t they concerned about being more accountable?

Diet Coke which due to the artificial sweeteners have caused heart disease, strokes, kidney damage, and even obesity.

Why aren’t they concerned about selling Coke Zero? In warm conditions the aspartame in the soda turns into formaldehyde which is known as a carcinogenic compound.

The confronting racism seminar is just another brain washing attempt to shame people for simply being white.

Coke knows that color does matter, green. They got caught in the hypocrisy of the cancel culture.

Should Coke be boycotted? As a consumer you are free to make your decision to purchase a product or not.

I feel the decision not to buy Coke should be made more from a health aspect than a political one.

We discuss this live Tuesday March 9th on Davin’s den 6:30 to 9:30 pm est. Go to davincomedy.com, click live broadcast and you are there. We are also live on the Davin’s Den Face Book page as well.

Join us won’t you?

PrevPreviousNBA: All teams will play national anthem ‘in keeping with longstanding league policy’
NextJay Leno Apologizes for Decades of Jokes About Asians: ‘In My Heart I Knew It Was Wrong’Next