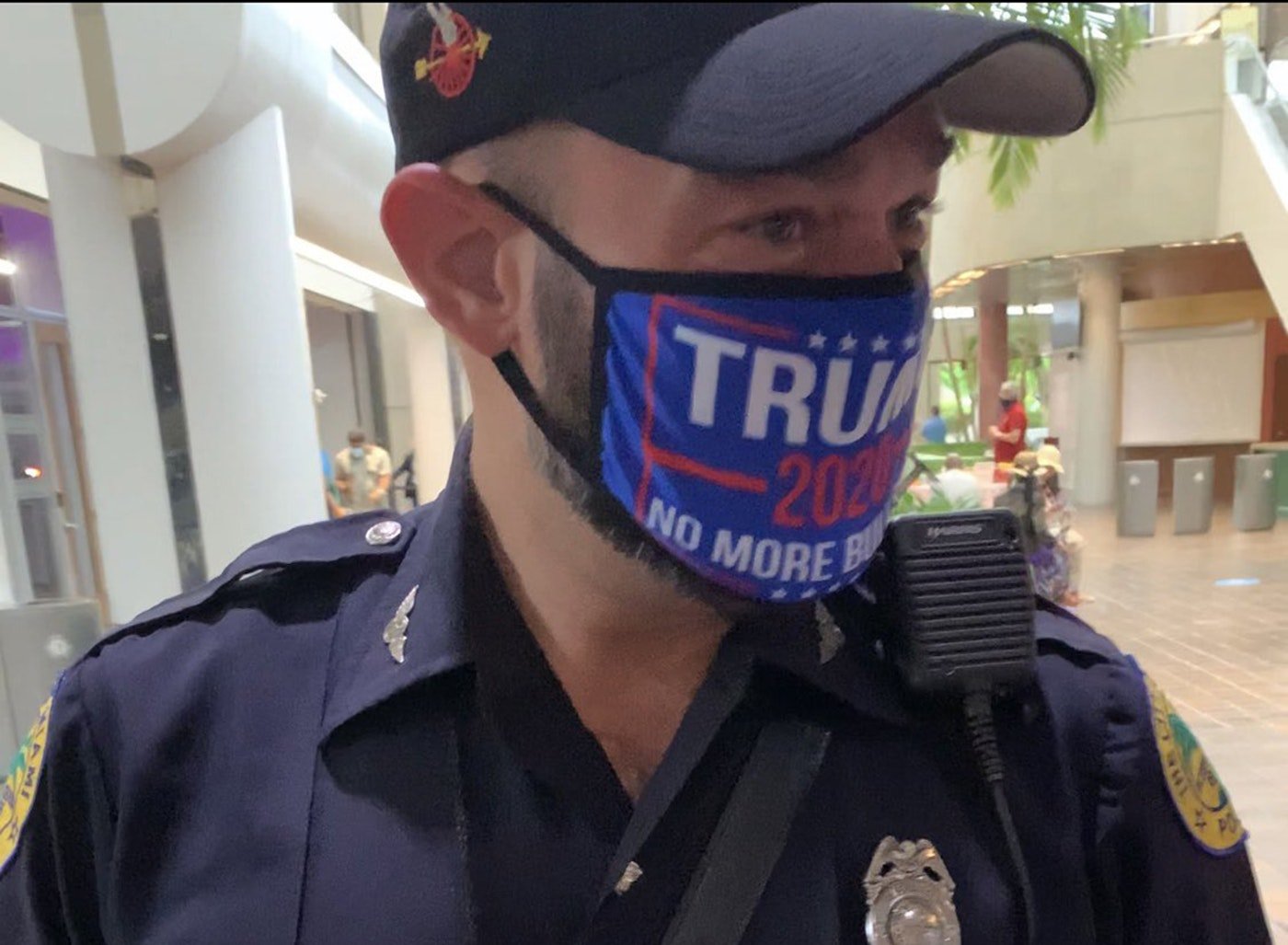 It boggles the mind that in a democracy such as that of the United States, that we are dealing with perhaps the worst instances of voter suppression and intimidation we have seen in many years.  Old tricks such as gerrymandering and stealing signs from lawns are sickening enough, but now we are dealing with threats of angry mobs intimidating voters at the polls, post office boxes being removed by the U.S. Postmaster General to suppress mail in votes, and the President casting doubt on the actual election process.

The 2020 elections have obviously gone off the beam.  News of all of the various problems make us sound like we are an emerging democracy in Central America or Africa, not the once most powerful nation on earth. It’s embarrassing, horrifying and depressing at all once.

Add to this poisonous stew the fact that in the news, we have a Miami police officer showing up to vote, in full uniform, wearing a mask that states “Trump 2020:  No More Bullshit”.

First of all, if there is any bullshit to be combated, you may wish to remember that the last 4 years were under Trump, so the bullshit is his and his cronies.  But beyond that, this is not something to just push under the rug.  This is just one instance, of which in this crazy year I’m sure there will be more, of a law enforcement official using his position to cram his political stance down citizens’ throats.  This is the very definition of intimidation.

It is entirely inappropriate for a policeman to be wearing anything that displays his personal political affiliation while on duty, at any time.  It is much worse to be doing it at a voting site, where people can see his obvious bias plastered on top of all of his official signs of power and control.  What if a problem were to break out between opposing voters at the site.  Would a person who was voting the other way feel safe to approach this particular officer for help?  Wouldn’t there be the fear that the cop’s obvious bias would be enacted in the way he chose to mediate the situation?

We are all up to here with political division and tension.  Our Democracy ensures, or it DID, that there are to be free and fair elections.  However, this year, we are dealing with a President that is making veiled and not-so-veiled threats of not accepting the results of the election, and refusing to leave office peacefully.  When you add to that the possible sight of police officers wearing signs that they are promoting this particular side on the election, it is not unreasonable to fear that there could be police backing for a hostile takeover of the White House, no matter the results.  Yes, this is one police officer in Miami, but if this isn’t intimidating to the voters, I don’t know what is. It is something that has to be dealt with immediately and harshly.