YOU CAN PAINT A STREET BUT NOT SOLVE A PROBLEM 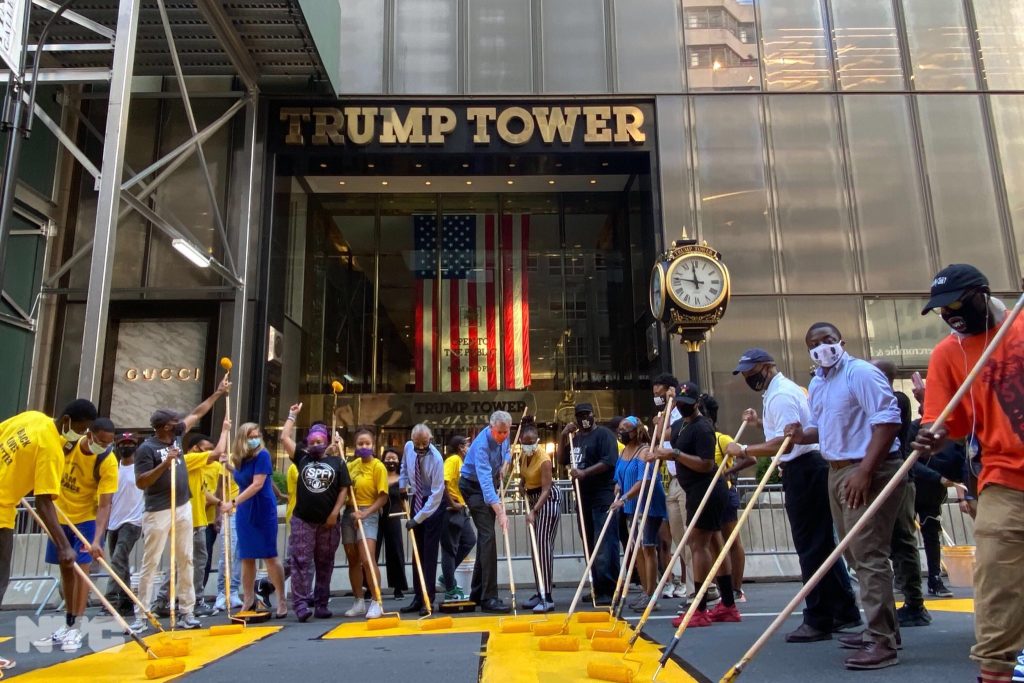 The New York mayor rolled up his sleeves and painted a bit of the mural, too, clad in a mask and flanked by civil rights leader, the Rev. Al Sharpton.

First of all, Al Sharpton is a race baiting criminal, a liar, and should be in jail for tax evasion.

As for mayor Bill De Blasio, painting a slogan on Fifth Avenue will not help the movement.

The movement doesn’t address and, in my opinion, will not address some of the issues below. They also have in their movement a radical element calling for Anarchy, as well as defunding police. To add to the mix, they also have disenfranchised white millennials that have student loans they can’t pay for from liberal colleges that profess hatred for capitalism as they make millions of dollars off their students with degrees that are not part of the real world. They are a generation that got coddled, and got a prize for participating. They are unemployed and frustrated by the covid situation and nobody wants to listen to them. But they blindly jump on to the BLM movement because they feel someone will hear their frustration which does not match the movements narrative. They don’t realize that an African American will have better job opportunities than them due to diversity quotas. Is this fair? For the foreseeable future yes as it does correct the imbalance from past decades.

Are reparations fair as some in the movement want? No because that was generations ago and does not pertain to modern society.

Instead of painting the street why isn’t De Blasio, Sharpton and the movement address the following.

Data shows that 93 percent of black homicide victims are killed by other blacks.

Let’s look at the fourth of July weekend CHICAGO (CBS) — Nearly 80 people have been shot in Chicago since Friday night this July 4th holiday weekend, and 15 of them have been killed. Twelve of the weekend shooting victims were under age 18. Two of the 12 were killed.

Among the incidents were a shooting that left a 7-year-old girl dead while she was visiting her grandmother for a 4th of July party in South Austin Saturday night, and two mass shootings – one of which left four people dead and four more wounded.

Let’s take a look at the violence July 4th weekend in NYC; Four men are dead and at least 36 people were wounded in an outburst of violence across New York City under the cover of Fourth of July fireworks, police officials reported Sunday.

The majority of incidents happened early Sunday morning. Three homicides occurred in Brooklyn, which has witnessed a troubling increase in shootings — some of which are believed to be gang-related — over the past month.

Please note as of this writing the weekend of July 11th in Black communities, a thirteen-year-old and fifteen-year-old were shot and a one year old was shot and killed. What has the Mayor, or Al Sharpton said?? Are they going to paint black lives matter where this one year old lay dead??

Let’s look at this statistic There were 6,000 blacks killed by other blacks in 2015.

By contrast, only 258 blacks were killed by police gunfire that year. That’s .043 percent

Do black lives matter? Yes, and so do white lives as 50.6 percent of whites were murdered by police compared with 26.7 percent of blacks.

Do blue lives matter? Yes as 148 cops were killed that year too.

So with the statistics above don’t all lives matter ???

Heather Mac Donald wrote in her book, The war on Cops and how the attack on law and order makes everyone less safe “A straight line can be drawn between family breakdown and youth violence.”

We make our spaces family-friendly and enable parents to fully participate with their children. We dismantle the patriarchal practice that requires mothers to work “double shifts” so that they can mother in private even as they participate in public justice work.

We disrupt the Western-prescribed nuclear family structure requirement by supporting each other as extended families and “villages” that collectively care for one another, especially our children, to the degree that mothers, parents, and children are comfortable.

With that in mind please see the following comment by Phillip Jackson, executive director of the Chicago-based Black Star Project, which helps children in mainly minority schools.

Father absence in the African American communities, across America, has hit those communities with the force of 100 hurricane Katrina’s,”

“It is literally decimating our communities and we have no adequate response to it.”

Here is some and not all of their agenda. Is there anything concrete here??

We are expansive. We are a collective of liberators who believe in an inclusive and spacious movement. We also believe that in order to win and bring as many people with us along the way, we must move beyond the narrow nationalism that is all too prevalent in Black communities. We must ensure we are building a movement that brings all of us to the front.

We affirm the lives of Black queer and trans folks, disabled folks, undocumented folks, folks with records, women, and all Black lives along the gender spectrum. Our network centers those who have been marginalized within Black liberation movements.

We are working for a world where Black lives are no longer systematically targeted for demise.

We affirm our humanity, our contributions to this society, and our resilience in the face of deadly oppression.

The call for Black lives to matter is a rallying cry for ALL Black lives striving for liberation.

in addition to low black unemployment rate (pre covid)His police-reform executive order, the First Step Act, released thousands of people from jail (90 percent of whom were black). He has promoted “opportunity zones” that incentivized private investment into marginalized communities, and also increased federal funding to historically black colleges and universities by 17 percent — a total exceeding $100 million, more than any president in history. Meanwhile, the Obama administration infamously removed a two-year Bush-administration program that annually funded $85 million directly to these prized institutions.

Dear Mr. Mayor, what New York City does not need is a black lives matter sign in front of Trump plaza. What it needs is leadership for all citizens of New York which is one of the most diverse cities in the world. And for the simple fact that you are canceling any permit this year for a gathering except a Black lives matter event shows your lack of leadership and bigotry to any other group but the one on your agenda. You are a disgrace